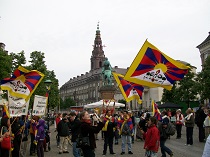 In a move that we have been waiting for for the last nearly six years, Copenhagen Police on Wednesday 18 April finally admitted that they had made "serious mistakes" by clamping down on peaceful demonstrations in favour of Tibet and Human Rights in China during a state visit to Denmark by President Hu Jintao in June 2012 and a visit by CPPCC Chairman Yu Zhengsheng in June 2013.

The head of Copenhagen Police, Ms. Anne Tønnes, stated in a press release on 18 April that the police force had taken note of the conclusions by a Tibet Commission formed by the Minister of Justice which in December 2017 - after two years of investigations - concluded that the police had issued "clearly illegal orders" that led to a series of "clamp downs on protesters, violating their constitutional and convention-based rights of expression and assembly".

For this reason, six Tibet activists and two Falun Gong protesters who had filed court cases against the police for these violations are now offered compensations of DKK 20,000 ($3,320) each. In three of these cases the compensations are double the amount we had asked for.

"In a democracy the police has to protect the fundamental rights of its citizens. We have to protect the freedom of expression of the citizens and secure the freedom of assembly. We have failed to do that in this case. We have made serious mistakes during the demonstrations as well as in the subsequent handling of the case. Therefore it is also important that we now have the possiblility of compensating those who have been violated in this case. At the same time, it is important for me to point out that this case has also resulted in several initiatives by Copenhagen Police to ensure that similar mistakes in the future are avoided".

In The Tibet Support Committee, Denmark, we are very satisfied that the police has finally acknowledged their illegal actions against us and that the socalled "Tibet case" (as it has been named in the Danish press) has resulted in a number of administrative improvements in Copenhagen Police as well as in legislative initiatives that are still in the pipeline. However, the course of events has uncovered many faults in how the system handles complaints by Danish citizens.

The "Tibet case" has also highlighted the extend to which the Danish authorities were willing to go in order to satisfy illegitimate Chinese wishes. The Chinese Government was ultimately behind the police actions against us because they tried from the start of the planning of the state visit in 2012 to convince the Danish authorities that they should clamp down on demonstrations. The work by the Tibet Commission has shown that the "danger" posed by Tibet and Falun Gong activists and, later, their threat to the "dignity" of the Chinese President was brought up during nearly all of the more than 17 meetings between the Chinese Embassy in Copenhagen and the involved Danish authorities during the one-month planning process before the state visit.

During the two Chinese visits in 2012 and 2013, Copenhagen Police tried to prevent about 15 individual activists from displaying Tibetan flags along the routes of the Chinese top leaders and they parked 4 minivans in front of our main demonstration to keep it out of sight. Consequently, The Tibet Support Committee, Denmark, coordinated several formal complaints and 12 court cases and we gathered and compiled information for the members of the parliamentary Legal Affairs Committee and the press. However, for the next more than three years, Copenhagen Police claimed that they had not tried to hide us or take flags away from us and that they had not acted under any orders to this effect. They sent a large number of answers to the Danish Parliament based on this lie.

On 22 September 2015, after having forced the police through high court to hand over sound recordings of their internal radio communication to us, we won a single court case and the verdict stated that there was evidence of police having prevented people from displaying Tibetan flags.

Subsequently, the former Police Commissioner "found" a written "operational command" from June 2012 which contained a clear order to the effect that any protests should be kept out of sight for our Chinese guests. This caused a huge scandal and resulted in two large investigations. One was by the Tibet Commission (consisting of three senior lawyers) and the other was taken care of by the Danish Police Complaint Authority.

The results of the Tibet Commission investigations were published in a 2001-pages report on 18 December 2017. It concluded that two mid-level leaders in Copenhagen Police were responsible for the illegal actions against us and for misinforming the Parliament. But it also criticised the Danish Ministry of Foreign Affairs and the Danish Security and Intelligence Service for creating an "atmosphere" which stimulated the police to formulate their illegal orders.

The "Tibet case" is not finished yet. We are presently waiting for the Public Prosecutor to decide which police officers should be punished based on the results of the investigations by the Police Complaint Authority and the Tibet Commission. Among them are the two police leaders mentioned above whom we have accused of lying in court.

Today, the Minister of Justice had to explain to members of the Parliamentary Legal Affairs Committee why Copenhagen Police and several ministries had deleted emails from top leaders and ministers that could have been used in the investigations by the Tibet Commission.

In the end, we hope that this sad case of a Danish kowtow to China will help to highlight how the Chinese authorities pressure other countries into submission in order to hide their crimes in Tibet - and how it can be fought.